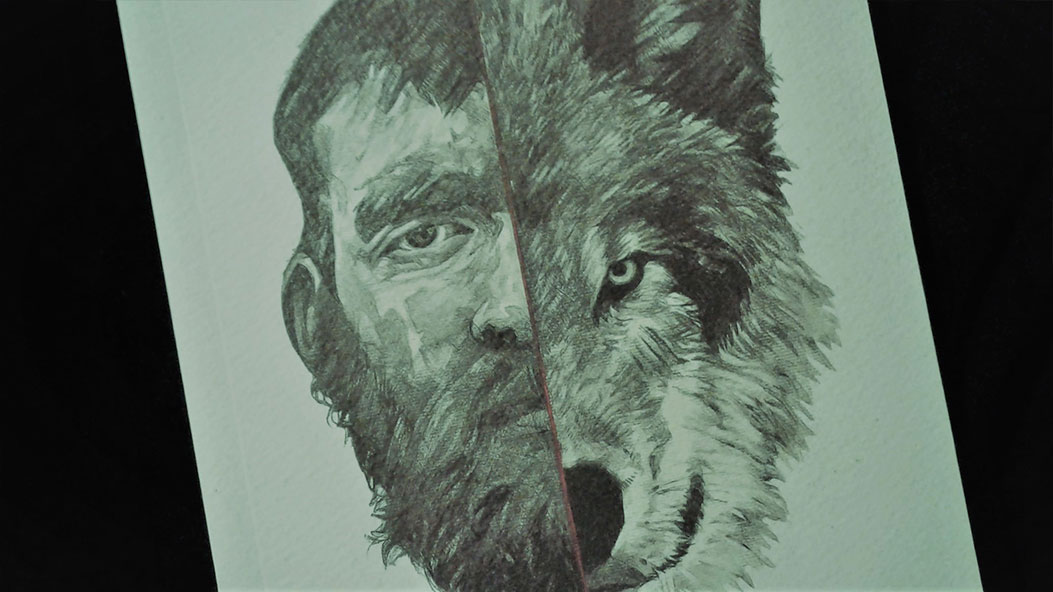 One afternoon, while the hunter was working his way through dense foliage at the back ridge of the mountain, he found himself directly facing two large, dark eyes staring at him. He dug his feet on the ground and remained still. Right before him there was a wild wolf, the size of a horse, his snout reaching up to the hunter’s face. They stood there for a while eyeing one another, both surprised by the other’s presence, but finally the hunter said:

And in a hoarse voice, the wolf responded:

“Come stay with me in my shack, let’s live together like everlasting comrades, and we can spend time talking in the evenings,” the hunter invited him, and went on, “I have no one to talk to, for humans are liars and animals are dumb.”

The hunter was deeply impressed by what the wolf had said, and straight away thought how interesting his evenings would truly be, if he’d spend them with such a smart talker.

“Come stay with me,” he repeated, “and I who am a human shall tell you more about humans than what you already know, and so you’ll become even smarter than what you are.”

That was something the wolf liked. He was an exceptionally bright animal, who loved learning new things. But before accepting the hunter’s invitation, he had this to ask him:

“First explain to me a word you’ve used, which I can’t understand. You say that we’ll live like ‘everlasting comrades’. What do you mean by ‘comrades’?”

“How obvious it is that you’re really wild, and that you’ve never lived in a wolf pack,” he said. “But of course, that’s why you’re so different. Well, then, ‘comrades’ are two creatures that believe absolutely in one another, care absolutely for one another and absolutely love each other.”

“And what does ‘absolutely’ mean?”, the wolf continued, enthused by so many new things he was learning.

“That means to believe, to care and to love your comrade so deeply that you would even be prepared to die for his sake.”

The wolf narrowed his eyes, and for a while looked at his new friend without talking.

“Fine…,” he haltingly said at the end. “I like it. I want us to live together like comrades.”

And they both returned to the hunter’s shack and henceforth started living together as comrades do.

A span of time rolled by and there came an evening which at first seemed like all those other evenings, when the two comrades would be so beautifully and so lovingly together. The hunter returned from his hunting, and so did the wolf from his, and they both went out to sit on the shack’s wide doorstep.

“I believe I saw panther spoor up on the mountain,” the hunter said.

“Indeed. I too have seen the traces, and I’ve even caught his scent. He’s been moving around our territory these last few days, yet so far I’ve never had the chance to meet him. But he’s certainly huge and powerful.”

“Oh, is that so?,” quipped the hunter. “But he’s definitely not as powerful as you.”

The wolf was pleased that the hunter believed in him.

“Sure,” the hunter agreed, and kept quiet.

For a while they sat back and listened to the sounds of the forest, until at some point the wolf sensed a distress in the man beside him.

“What is troubling you, comrade?,” he asked with much concern.

Taking a deep breath, the hunter turned and looked at the wolf straight in the eyes.

“You know… I’m certain that if you happen to come across that panther, you can sure outmatch him. But still, if you only fought him with your claws and teeth – who can tell – you could find yourself in a moment of mortal danger. That’s why I’d like to give you my one and only gun, for I’d prefer myself to die hunting, rather than you. I beg of you, don’t say no.”

Tears welled up in the wolf’s eyes, seeing how much the hunter loved him. But he couldn’t bear the thought that his comrade would be exposed to the dangers of the forest.

“No, my friend, no,” replied the wolf, deeply moved. “Let me take the risk, I don’t want you to be in greater danger than I.”

But the hunter explained to him that there is no greater joy in the world than giving to one’s own comrade, and that its denial brings the greatest sorrow. On hearing this, the wolf was convinced he should go out with the hunter’s weapon the following day.

And so next morning the wolf slung the rifle over his shoulder, bid his friend farewell, and headed as usual for the back ridge of the mountain. But he was troubled, for he knew that the hunter would now be going out without his weapon.

Some while later on the ridge, the wolf heard footsteps, sniffed the air and immediately picked up the smell of the panther. It was all too close. That was dangerous – but he had with him his comrade’s rifle. He unslung it, stood erect on his hind feet, grasped it with his forelegs, checked it and called to mind the hunter’s instructions on how to use it. And yet the smell had already virtually enveloped him, the footsteps echoing almost at arm’s length and, suddenly, the hungry panther appeared from behind a bush. It all happened within a split second. Holding the weapon as he did, the wolf could neither run nor attack. The panther pounced on him with a mighty growl, latched himself with his claws onto the wolf’s back, and bit him deep in the neck. Reeling and in pain, the wolf remembered that his comrade was also hunting on the back ridge.

“Comrade, help!,” he called out with his dwindling strength.

And then he heard a tramping of feet, and while collapsing to the ground saw the hunter rush to the spot. He was taking aim at the panther with a second rifle. Taken aback by the presence of the human, the panther abandoned its prey, receded and stood still with ears dropped back.

“Thank goodness you have another rifle,” groaned the wolf in pain. “Shoot him, comrade…”

But, to his astonishment, he heard the hunter address the panther behind the barrel of his gun, and he was saying:

“You’re courageous, you were able to subdue such an enormous wolf. You are not like the other animals.”

“And neither do you resemble the other humans,” growled the panther, and in a flash the wounded wolf brooded yet once more on what humans are and what are animals.

“No… don’t do that…,” bellowed the wolf, just as the hunter was turning his gun straight at him, pressing the trigger.

Since then, the hunter often takes to asking himself: who was the wolf speaking to in his final moments – him or the panther?

From the collection of short stories Hunters and Wolves, Athens: Patakis Publishers 2017